Holes in the Knees

My son Curt met all his developmental goals with the exception of speech development. The day my husband and I were given the report back from the speech therapist about our son’s language delay was one of the worst days in my life. No special needs parent forgets how their first time receiving a report about their child. I remember hearing the therapist talk to us, but I wasn’t listening because my heart was somewhere in the pits of my stomach, completely broken. It took days for me to shake it off.  I had a 2 ½ year old son and a 1 year old daughter who needed me and I needed to snap out of it and work out a plan for the parent I wanted to be. So I wrote this down in my planner.

Problem: Curt is not talking

I remember clear as day when the local school district diagnostician came to my home to tell me she thought my child had Aspergers and then later told me she didn’t think I played with him enough. She asked, “Do you get on the floor on your knees and play with him?” Did I? I thought I did, but could not remember so clearly anymore. I felt like I was hit by a load of rocks. Why does the mother always get the blame? I was furious.

After she left, I went online and looked up Aspergers. It didn’t sound like my son.  Aspergers kids tend to talk on time. My son wasn’t really talking. He had maybe 15 words total and many of those were in a language he made up.  So she was 100% wrong on Aspergers. Did I play with him enough? Nothing feels like enough when you feel like a parental failure (which I wasn’t by the way, but good luck trying to tell me that 12 years ago).

I went to the Gap for a little emotional therapy shopping and bought a new pair of blue jeans. These jeans and I had a plan. I was going to wear them every single time I got on the floor to play with my son. They weren’t just my “Mommy jeans,” they were the symbol of my relationship with my Developmental Language Disorder. Curt had deficits in both expressive and receptive language and it was overwhelming. He was in the 2nd percentile for his age. But I could see he wanted to learn and communicate.

Curt and I started at the train table, playing with Thomas the Train everyday. We practiced playing with toys back and forth. I would talk and model questions and answers. I really wanted him to be able to ask for water and tell me when he was hungry.  So we spent a lot of time in the kitchen modelling sign language along with spoken words for water, eat, more, etc.

I didn’t look at speech goals and let them overwhelm me. I made my own speech goals depending on what was best for him and the things he found frustrating. If I could ease his frustration more growth would happen and it would happen faster.  I told the Speech therapist, “Okay for the next month we are going to work on personal exchanges where he needs to ask for things he needs and we need to model the exchange a few times. Don’t frustrate him at all. Just model and repeat, model repeat and then give him the item. He will catch on!” We started with water, then moved to food, toys, and then things he was interested in. I managed to work in reading site word, shape names, colors, and the abc’s. One of his first words was Frapachino. Guilty as charged, let’s just say Starbucks got me through some tough days.

I would count street light poles on the way to speech therapy. Then one day out of the blue he started counting with me. I broke down and cried. I had been waiting for that milestone forever. It meant that every time I talked to myself like a crazy lady in the car was all worth it. In the beginning, one goal took about two months and then after a year, goals took about two weeks.

Six months after I bought my jeans I noticed they were faded at the knees. Two months later the knees ripped. I wore those torn up jeans till Curt’s next speech evaluation. While his speech therapist was reviewing his growth over the last year, I couldn’t help but reflect on my own growth and the holes in the knees of my jeans. Those holes meant something to me. I earned them!

I bought a new pair of jeans soon afterward and I repeated this six more times. I have kept most of the holey jeans. They have become my trophies for each set of milestones met. I always tell newer DLD Moms to go buy a new pair of jeans, get on the floor and play with their son or daughter. Enjoy your child and try to have the best time putting holes in the knees of those jeans. 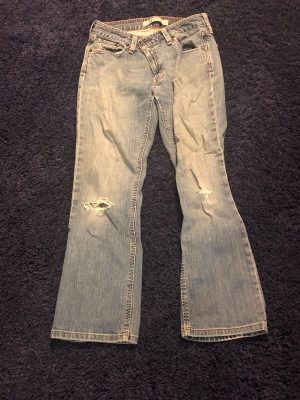 Nancy Thompson lives in Austin, Texas and is a Mom to a 14 year old son with Developmental Language Disorder, a 13 year old daughter and a 6 year old son.  She enjoys reading books, Austin music, art museums, eating tacos, and going camping with her family. She loves helping others in the DLD and special needs community and making things better for all children.