We are a Finnish-Norwegian family and we live in Suzhou, China. We have two children, Lucas born in 2010 and Oliver born in 2012. Lucas has Developmental Language Disorder (DLD). Lucas said his first proper word when he was two years old. Before that he had made his own specific sounds to mean different things. He also developed his own sign language as means to communicate with us. It often seemed he could not hear us, although his hearing was tested to be normal. He would ignore us talking to him or consistently reply with “uh?”. At that time my husband and me did not know about DLD.

Lucas was diagnosed with DLD when he was five years old. It was a Finnish friend of our family who had previously had experience with children with DLD through her work as an educated teacher who approached me and made me aware there may be something like that with Lucas. Then we took him to an SLP for an assessment, which confirmed DLD. Lucas then started with language therapy by an SLP, and the therapy is still going on, once a week. Lucas’ DLD manifests in expressive language. After the therapy his receptive language skills improved quickly. Although, still he can have problems understanding if there is new vocabulary or new concepts. However, after finding out why Lucas was behaving the way he was and everything else, it made sense; it felt like the pieces of the puzzle found their place. In hindsight, I have realised the signs of DLD were clear enough, and I have wondered why I could not think of taking Lucas to an SLP before. I feel it is embarrassing. Not even then when the little brother’s language development was going faster. We thought the reason for the slow language development was that we are living as expats and they attend a school with other languages than our home languages.

Lucas has received support in an extensive manner, on three different levels. In addition to the weekly language therapy, Lucas received weekly learning support, one on one sessions with the school’s learning support teacher starting in kindergarten (5yrs) through to grade two (7yrs). Also, our friend who originally made us aware of Lucas’ DLD, she did not work at the school, but she came to Lucas’ class giving learning support. She worked with Lucas in in class learning situations on vocabulary and concepts, connecting them from English language to Finnish language and vice versa. This showed to be very efficient way for Lucas to learn vocabulary and concepts. She worked with Lucas diligently twice a week every school week from kindergarten to grade 2. It is amazing to see how the different languages in his mind work together linking ideas and helping with understanding of concepts and new vocabulary.

Lucas is a perfect example of how efficient and important early support is. He used to be a very quiet boy with low self esteem struggling in situations with social interactions. He would quietly withdraw himself to the background playing alone on his own, when he instead would prefer a friend to play with. Now he has progressed to being an active pupil in class, doing well even in group situations, a confident learner, doing well at school. He actually likes school. And he has friends. Although, there is a difference in that while in familiar group of people he is confident, but with unfamiliar people and surroundings he is insecure and easily withdrawing to the background. Lucas is quite passionate about football (soccer). He is quite good at it and his talents in it have been recognised. This must have helped boosting his self esteem, not only on the pitch, but also at school and in social situations.

Lucas and we are very lucky to have had so much support for Lucas. Even though the early support is a blessing, it almost sometimes also feels like a curse. As a result of the early support Lucas is doing well at school. He likes school, participates in class and has a thirst for knowledge. On the other hand, as he is doing so well at school, the teachers who do not know DLD cannot differentiate and understand his needs. Lucas’ school is an IB school. Every school year the home room teacher changes, even class mates change. Lucas has so far had five different home room teachers and only one of them has known about DLD. I find it very frustrating needing to explain Lucas’ DLD and his challenges again and again and again. The new teachers do not know how he was before or how much he has progressed. They see him how he is now. Every summer I am dreading to the start of the new school year about who is the new teacher and what is she or he like. For example, one of Lucas’ previous teachers, who did not know about DLD, said at parent teacher meetings “Lucas is so beautiful and smart boy, there cannot be anything wrong with him!”.

When Lucas started on grade 3, his case manager from the learning support department changed. The new SEN teacher was new to the whole school. Without meeting with Lucas to assess him she decided to end Lucas’ learning support. I accepted it as Lucas that year had a good teacher who knew about DLD and could differentiate Lucas’ needs from other pupils in her class and he was doing well. The SEN teacher informed me she would keep on monitoring Lucas and if needed, start learning support again. She would not update Lucas’ individual learning plan (ILP), even though I approached her about it. I considered her attitude quite unprofessional; how is she able to implement monitoring, if not having a tool to which compare the child’s progress, knowing the child has DLD. Finally, after several months after I had been in contact with the head of the learning support teacher and the elementary vice principal, she updated the ILP. The ILP is updated for this year, grade 4, but again Lucas has a home room teacher who does not know DLD.

DLD really is a hidden disorder. It is challenging with DLD at an international school like Lucas’ school where there are pupils from all around the world with different language backgrounds. Each year there are new pupils who have poor English skills and their needs are much more visible than Lucas’. Lucas who has attended an English speaking day care since he was 18 months olds speaks better English as such than many of the new pupils. Therefore Lucas’ challenges are even more hidden in an environment like this.

I am very glad I am able to support Lucas with his school work as much as I can from home. Home work is getting more and more challenging for every grade level, including more and more writing. Lucas experiences writing as very challenging and he does not like writing. When we start doing homework after a school day, it often starts with him getting frustrated, sometimes going into a tantrum, shouting “I have done enough writing for today!” Lucas needs a parent by his side for the most of the writing tasks. We start on doing a mind map, Lucas seems to like this method very much and it so seems to help him in finding the words he needs for the task. Graphic organisers are also good in helping him structuring his thoughts, even though we often need to start on a mind map first. The school days are long, and there are still times when he is so exhausted that I need to in some degree basically dictate for him  what to write. What also has helped Lucas to cope with home work is that we in advance schedule the days for homework for each week. 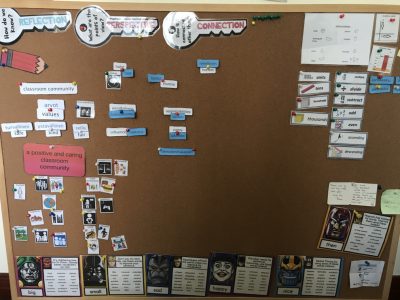 It has been a lot to take in to understand what DLD is. We are very lucky with Lucas in many ways. He is very intelligent and smart, and he is a fast learner. I fear the coming school years, but I try not to think about the future too much. Instead, focus on this school day and this school year.