I was always a firm believer that children hit their milestones when they are ready, so wasn’t that worried that Amelia was slow to start talking.  There were many comments that second children are always slower to talk or that her sister (18 months older than her) was doing all the talking for her….

However, by the time Amelia was 2yrs old it became obvious that, not only was she not talking, she also understood nothing.  She picked up lots on visual cues, but when it came to spoken language, there was nothing.  The Health Visitor, and subsequently the Speech and Language Therapist, agreed.

This brought many questions – 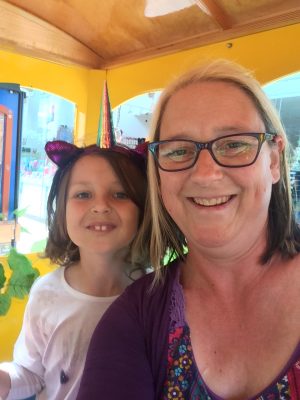 Why couldn’t she understand anything?

Would she ever talk?

She’s 7.5yrs old now.  Over the last 5.5 years, life has been a bit of a roller coaster.  She attended a special needs nursery, but now attends the same mainstream school as her sister (with additional support).  We spent hours laminating symbols and creating communication books, but she now communicates verbally (though visual supports still help).  She started developing spoken language (and understanding) from about the age of 4.  It didn’t follow your typical pattern of development, but she got there in her own way.

Last year, at 6.5yrs old, she was diagnosed with DLD (Developmental Language Disorder).  When you first meet her, you might not realise she has DLD.  However she does continue to struggle with both communicating and understanding – especially when more complex language is used.  She has to work extra hard to follow what people are saying.  But she is loving school and loving life.  She is determined, cheeky, funny and loves being a part of everything.  She is in a drama club, is learning the cornet, and is in the school choir and cross country clubs.

Language will always be “tricky” for Amelia – but with her determination and the right support she can achieve anything!!!